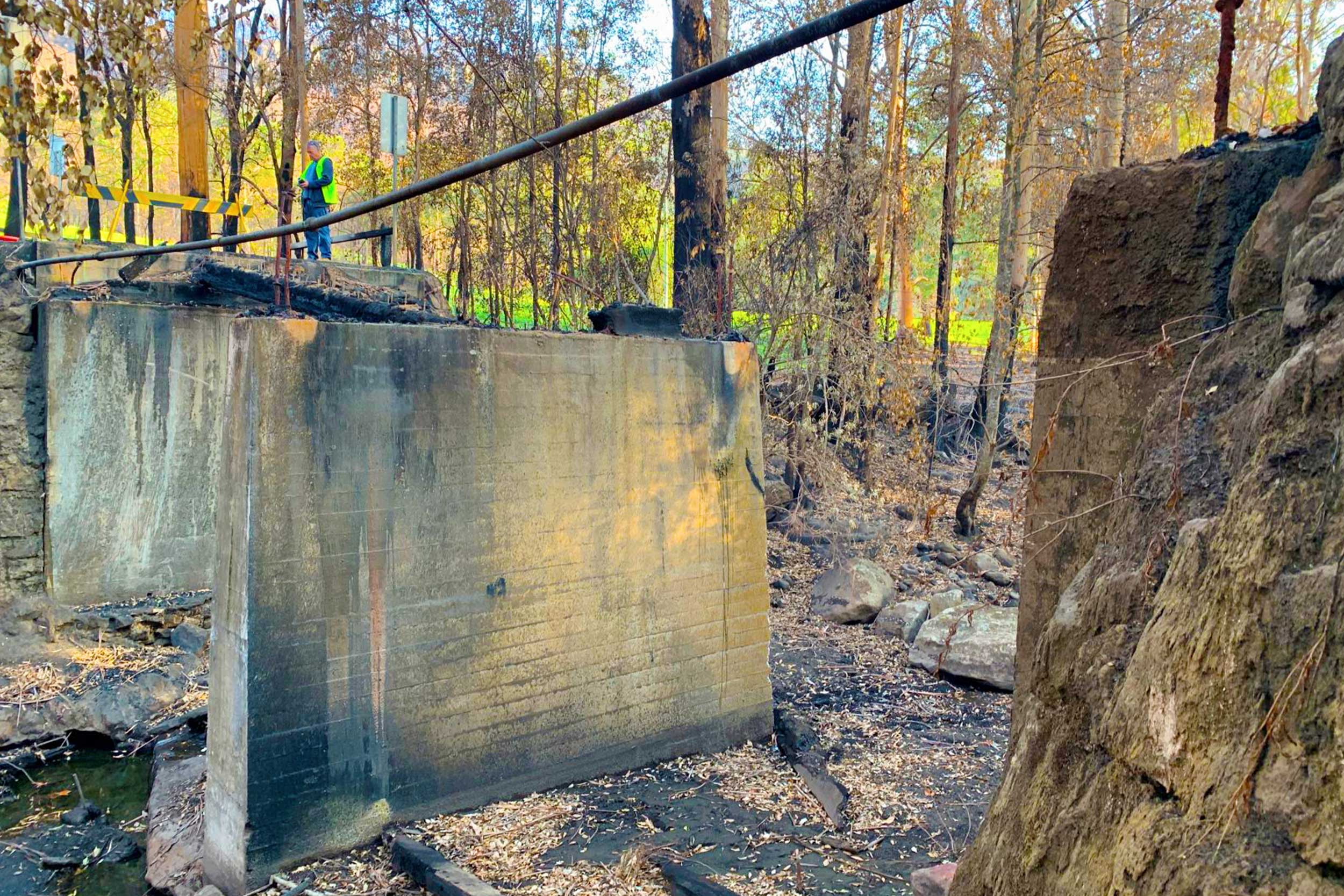 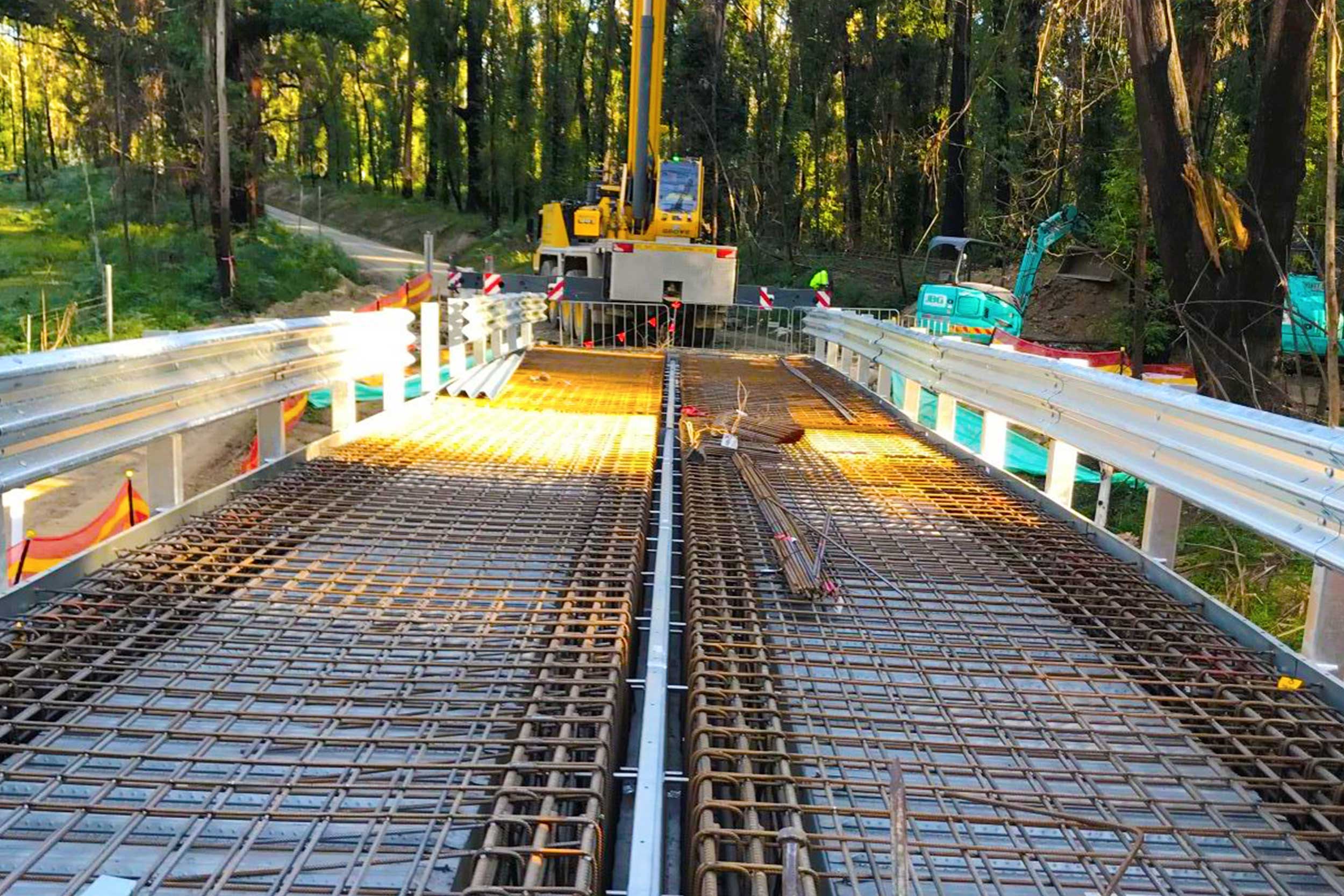 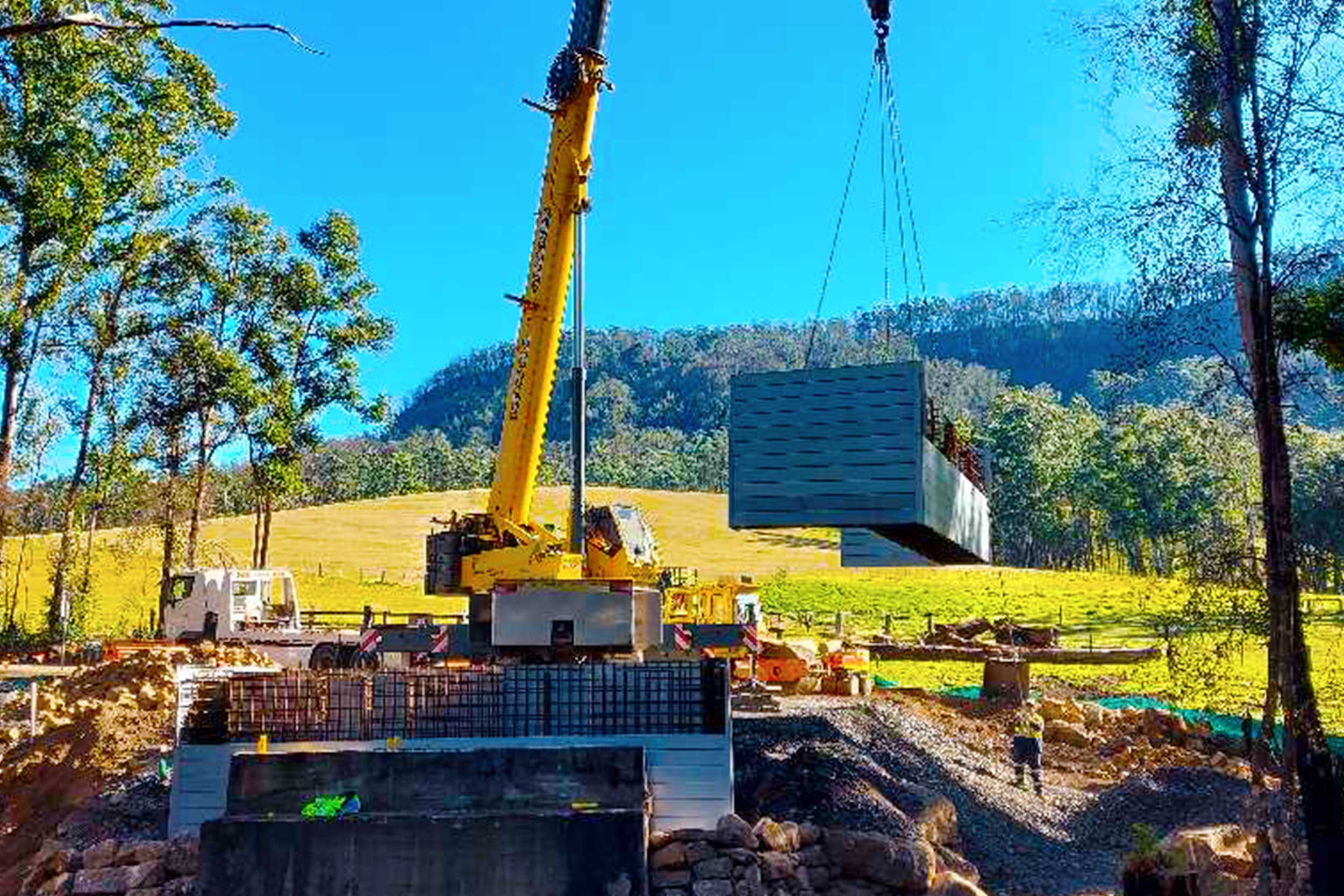 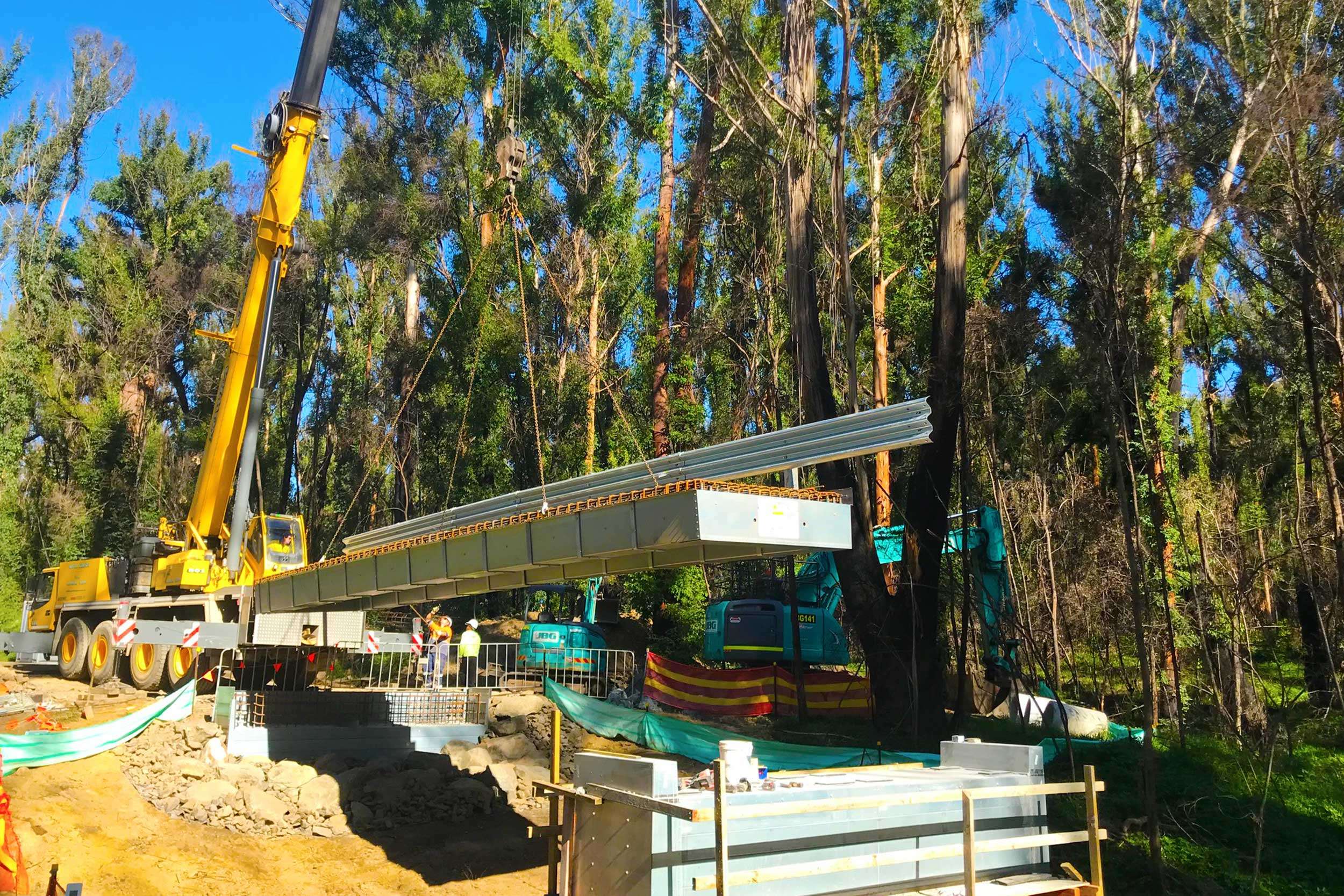 During the recent NSW bushfires some 60 County-owned bridges were burnt or damaged, with the Currowan fire destroying four bridges on Shoalhaven County’s road network.

Two of the major bridges were School Creek – a 52.5ft, single span bridge, 20ft off the waterway with serious access issues and no semi-trailer access, and Toomboolomobah bridge – a 79ft, 2-span bridge in a very remote area with limited access and a 5-tonne load limit on one side.

InQuik worked closely with Shoalhaven County to pull together the designer and local contractors to get the projects delivered, getting access back up and running as fast as possible.

The first Shoalhaven bridge destroyed by the Currowan fire was School Creek bridge in Budgong, on 4 January 2020. The installation of the replacement bridge in late July is a terrific testimony to regional community capability. All companies involved in the bridge replacement were regional. Supported by local earthmovers, crane contractors and designers, InQuik’s modular bridging system was constructed in Newcastle before being transported to Shoalhaven for assembly. Having already prepared the site, four assemblers with a crowbar, a crane driver, and technical supervision had the bridge components assembled in four hours, ready for the concrete pour.

Satisfying before and after photos, including the official opening by Mayor Findley and local residents, tell a great story of repair and recovery into resilience.

The reinforced concrete bridge across School Creek was completed promptly, just seven months after the fires that burnt 80 percent of the Shoalhaven.

Shoalhaven City County Mayor, Amanda Findley said “all that remained of the bridge after it was destroyed by fire, on January 4, were the concrete piers”.

“The School Creek bridge has been constructed relatively quickly with a crane lifting into place factory-made bridge decks, prepared in Newcastle, ready for the final concrete pour.”

“Understandably local residents have found the lack of a bridge difficult, especially following the trauma of the fires. Without a bridge, the journey to Nowra or Kangaroo Valley could take an hour by car. Thankfully a landowner has generously allowed some local vehicles under a temporary 2-tonne culvert crossing via private property, but that has been dry weather dependent,” she said.

Clr Findley adds, “County has worked as quickly as possible to rebuild infrastructure damaged by the fires with more fire resilient replacements which has taken time to secure funding, finalise tenders and arrange contracts. It is heartening to see Budgong residents can now enjoy a high-quality concrete bridge, a replacement for the previous aged timber bridge”.

Shoalhaven County was the first local government authority to place an order for the InQuik bridge at School Creek and Toomboolomobah in the Shoalhaven area, and as a result have led the way for other municipalities to use this type of fast-track installation. InQuik has now been commissioned to install over twenty bridges as a result of the Currowan fire.

Clr Findley finds it “also pleasing that all businesses and workers involved in the reconstruction, earthworks and cranage are local and/or regional NSW-based businesses. Contractor InQuik’s internationally patented bridging system has enabled the bridge to be built quickly and providing an enduring permanent solution at a competitive cost to temporary bridging solutions thanks to the innovative semi-modular construction method”.

The replacement of the bridge over School Creek on Budgong Road is the last of the four destroyed bridges in the Shoalhaven to be replaced as a result of the Currowan fire, and just one of the significant achievements of County and its Recovery Committee.

Benefits of the replacement

The InQuik modular bridge system is an innovative, patented design and manufactured product that solves the challenge of aging infrastructure.